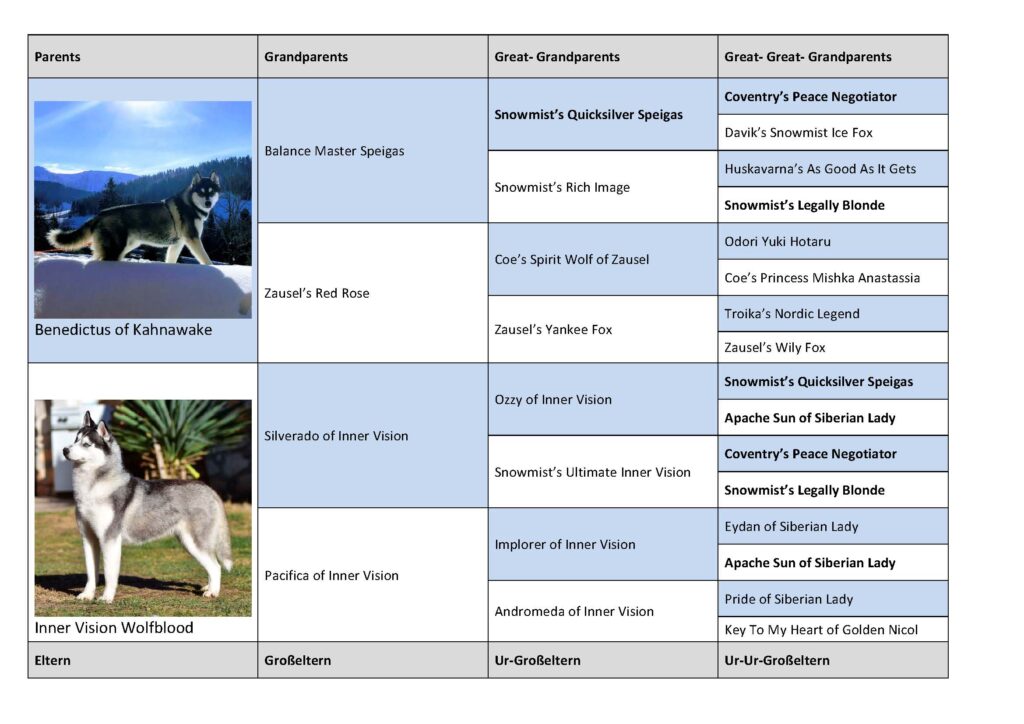 In 2019 we tried to breed Opra twice, but both times she did not conceive. Those were stirring times, Opra and Kira did not like each other very much and had a fight once in a while, and then we missed the perfect day for breeding both times.

At her eye test in November 2019 she was diagnosed with ICAA mildly affected. Therefore, we had to decide to either give up breeding her or look for a gonio-tested stud, which is not easy, because testing for goniodysplasia is not mandatory in our club.

So we decided to mate her with Tio (Benedictus of Kahnawake), a boy from our second litter out of Kira (Zausel’s Red Rose), sired by the late Salai (BISS MCh Balance Master Speigas). So we are planning for another moderate linebreeding. Salai’s sire Fizzy (Snowmist’s Quicksilver Speigas) is Opra’s great-grandfather. 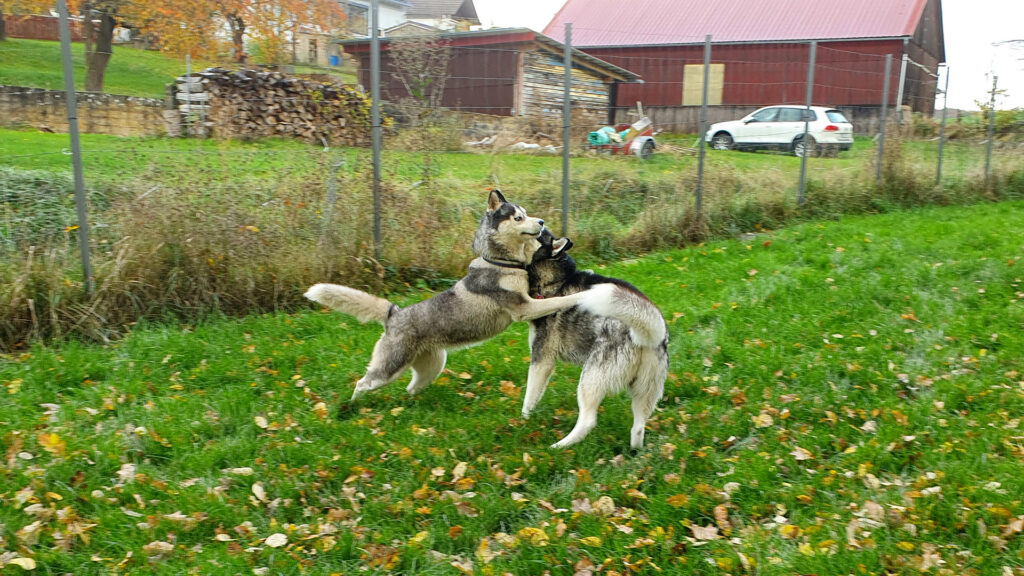 Due to those two failed mai´tings, we were a bit anxious. Therefore, Tio spent about a week on our farm while Opra was in heat. On October 30th, we had a match.

Tio returned home, and we had to wait patiently. Opra was feeling fine, for some time she continued working in harness. And after a few weeks she gained a bit of weight.

On December 7th, she was scanned in the vet clinic. The date was late, we wanted to be sure. 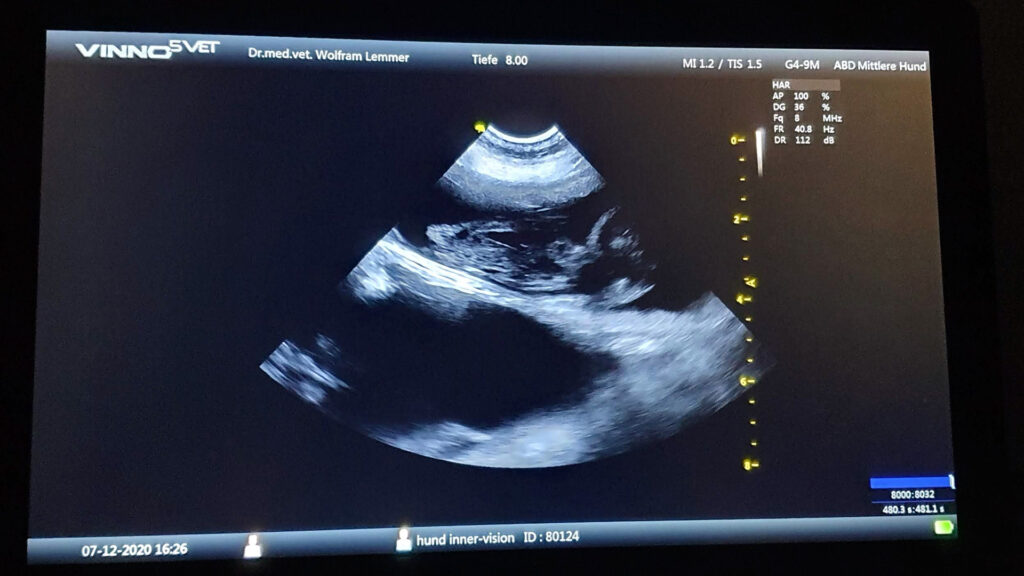 The fetusses were already quite big. The vet counted 5 to 6, and we were happy that Opra finally would have puppies.

A few days before Christmas we did an x-ray to be sure about the number. This time, three puppies were clearly visible. 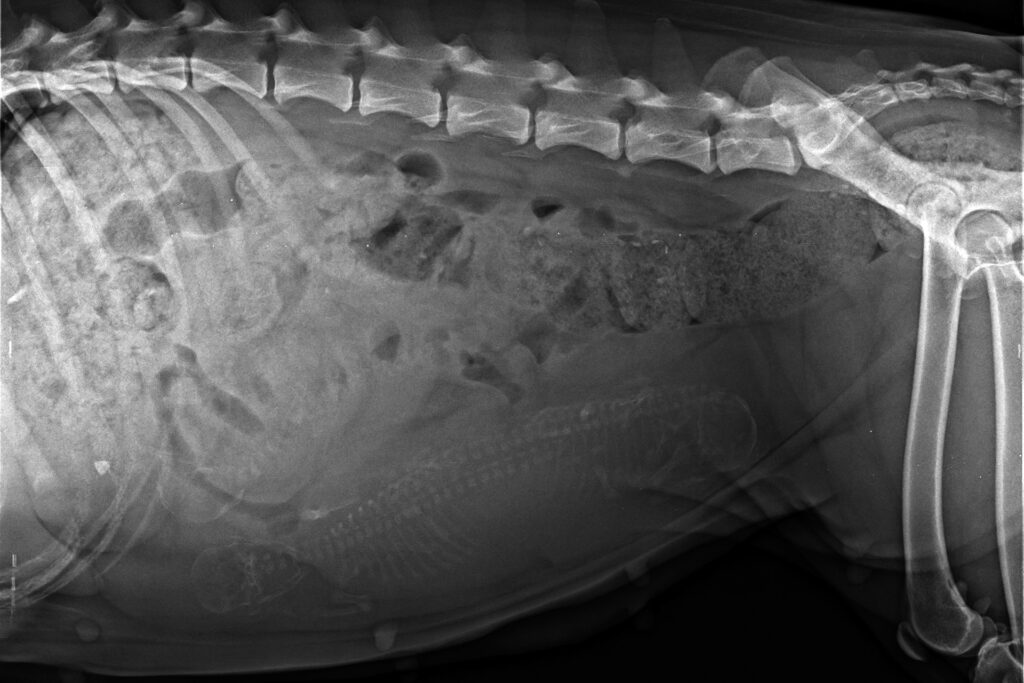 Opra was getting quite big, so we had been expecting more than three. She had no edema and apart from moving a bit clumsy, she was still quick on her feet.

After Christmas tensio was rising. Her temperature never fell distinctly, but her tummy was going down and she needed to rest more. 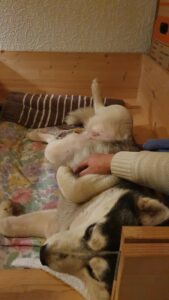 On December 29th, Opra went through labors: The babies were pushed into position. She was lazy and gladly moved into the whelping room and the box. I spent the night at her side, but sleep was not an option.  Every now and then, she was pacing restlessly, panting almost all the time. She was tossing an turning and sprawling in the box. Fondling was happily appreciated.

In the morning, time had come. Constantly panting, she crouched and convulsed, licking herself, streching, sprawling, left the box and went back in. After a while she screamed with every contraction, and I had to hold her. The amnion was visible, she hat opened it with her teeth and little paws were already born.

With the next wave she rolled on her back, so I took a midwife’s job. Soon the well wrapped up body of the pup slipped out, and a last one produced the little head, followed by the afterbirth. The little baby, a dark, black pigmented girl was unwrapped and the cord cut, the placenta put out of reach, before the softly toweled puppie was placed with her mommie.

Every puppie’s birth is somewhat overwhelming. With the experience of five deliveries you function much better than the first time, can keep your emotions in check, and support and help your bitch more effectively. Yet, it is a very deep emotion to watch, what efforts are necessary to bring those little packages, containing a little wet furry living being, to light. A baby that instantly and spontaneously finds his way to the milk bar. 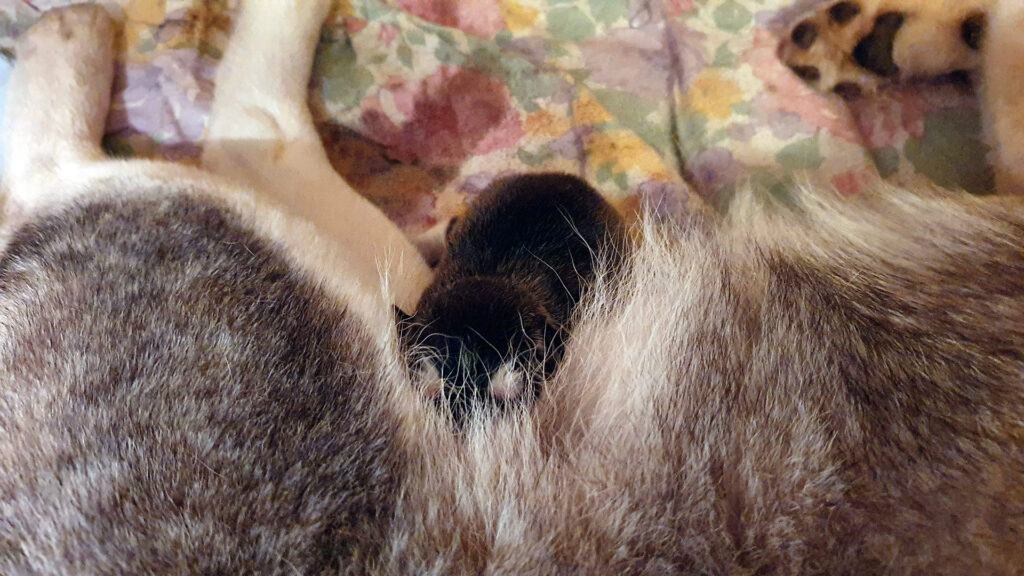 The second puppie came as a surprise, after Opra had taken rest for more than an hour. Between two contractions which were not even strong, she left the box, when the package dropped on the floor right behind her. At first this baby, another little black girl, was not breathing spontaneously. She could not get rid of the liquor in her lungs. She needed some massage, holding her a bit upside down, and after some coughing she started to breathe on her own and searching for the milk bar.

Half an hour later, the third little black girl was born. The x-ray had stirred a vague hope for another pup hidden behind the well filled guts. But soon it was clear that Opra was done. She was lying in the box, on fresh blankets, nursing three little babies, happily dozing. 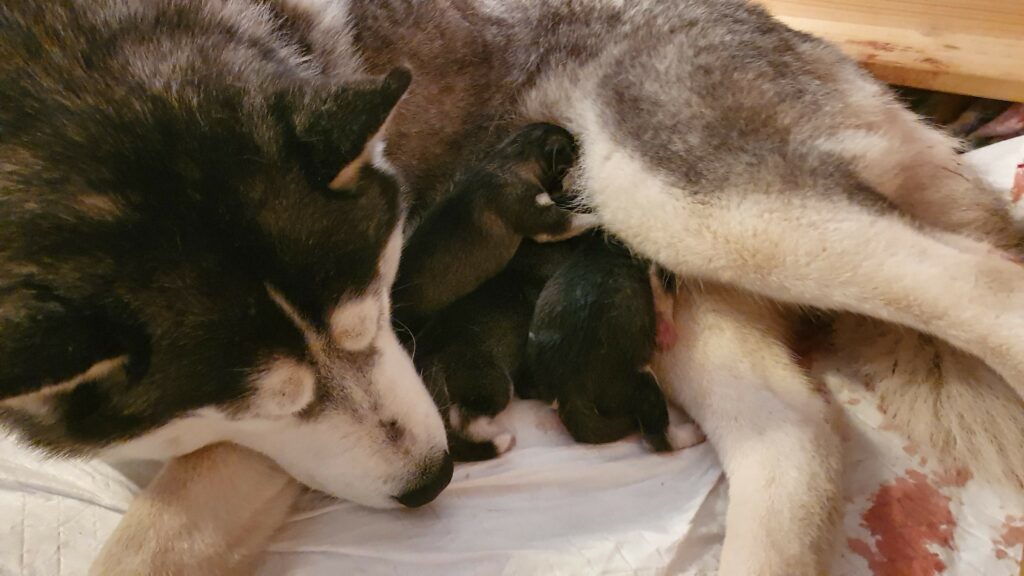 We spent the day cleaning the room, sitting together talking about what had happened, while Opra was devoted to taking care of her baby girls.

Three weeks later, the three little girls all have tripled their weight and are curiously looking at the world. Yet, “Mother’s Finest” is still the most important thing!