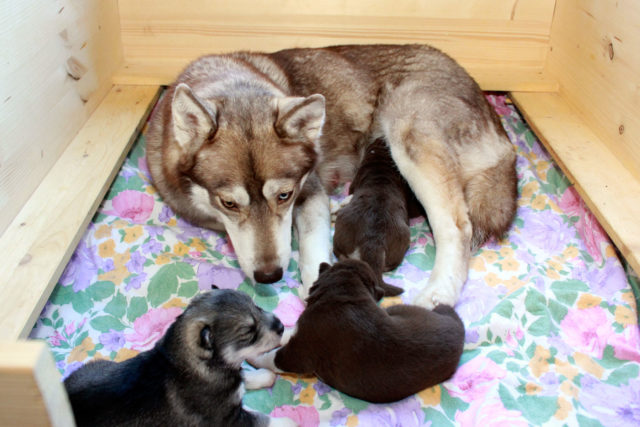 It took us quite some time to consider the objective of our breeding. Of course the prime directive always is about producing healthy, well-tempered, capable and beautiful dogs that fit with the standard of the Siberian Husky as framed by the SHCA and adopted by the FCI.

Within the breed of the Siberian Husky, there are two tendencies that come up with very different results, the sportive working and racing lines on the one hand and show lines on the other.

Racing lines are usually bred by mushers. Priority objectives are health, high performance and an even temper towards humans and dogs, although the latter often is subordinated to speed and performance. Beauty is quite irrelevant when choosing sire and dam. Hence, the appearance of racing line Siberian Huskies, even when they are purebred, sometimes no longer conforms to the standard of the breed: they are too tall, with legs too long, their scull’s shape is not correct (insufficient stop, ears too wide, eyes too round). Dogs from racing lines are rarely seen in shows, because they hardly have a chance to succeed there. Their breeders and owners do not care much about aesthetical considerations, all that counts are the results in competitions and on the trail.

In show lines, the breeders’ attention is focussed on what qualities are rewarded by the judges to gain success and admiration in shows. They often subordinate performance to beauty. Among show line Siberians you find dogs that seem to hover above the ground while gaiting, but lack drive in their hind quarters, which is essential for pulling. Dogs whose performance no longer fits the criteria of the standard, because these abilities are not required ouside the working dog class. There are breeders whose offspring sets a benchmark for generations of show dogs, a measure that other breeders all over the world follow – often the “prototypes” were well capable for sleddog sports, yet those bred following their model are not.

Both lines tend to produce extremely different shapes. We do not want to criticise that, since the capacity to work as a sleddog is written down in the standard of the Siberian Husky breed, and rejoicing beauty is a human feature. In a sense, success proves both right.

Nevertheless, we think the situation is difficult, since in result, both lines drifting apart leave the standard as a compilation of rough guide lines, as if there were now two races of the Siberian Husky.

Our objective is to breed Siberian Huskies that conform to the standard considering beauty as well as performance, and not to follow either extreme, but find a balance.

Therefore, we chose dogs whose pedigrees embrace working lines (particularly from old foundation lines) as well as successful show lines and we will account for their performance by taking performance tests in the future. However, we will not attach to much importance to either results in shows or in competitions, to not let the objective of our breeding – harmony between performance and beauty – slip out of balance.