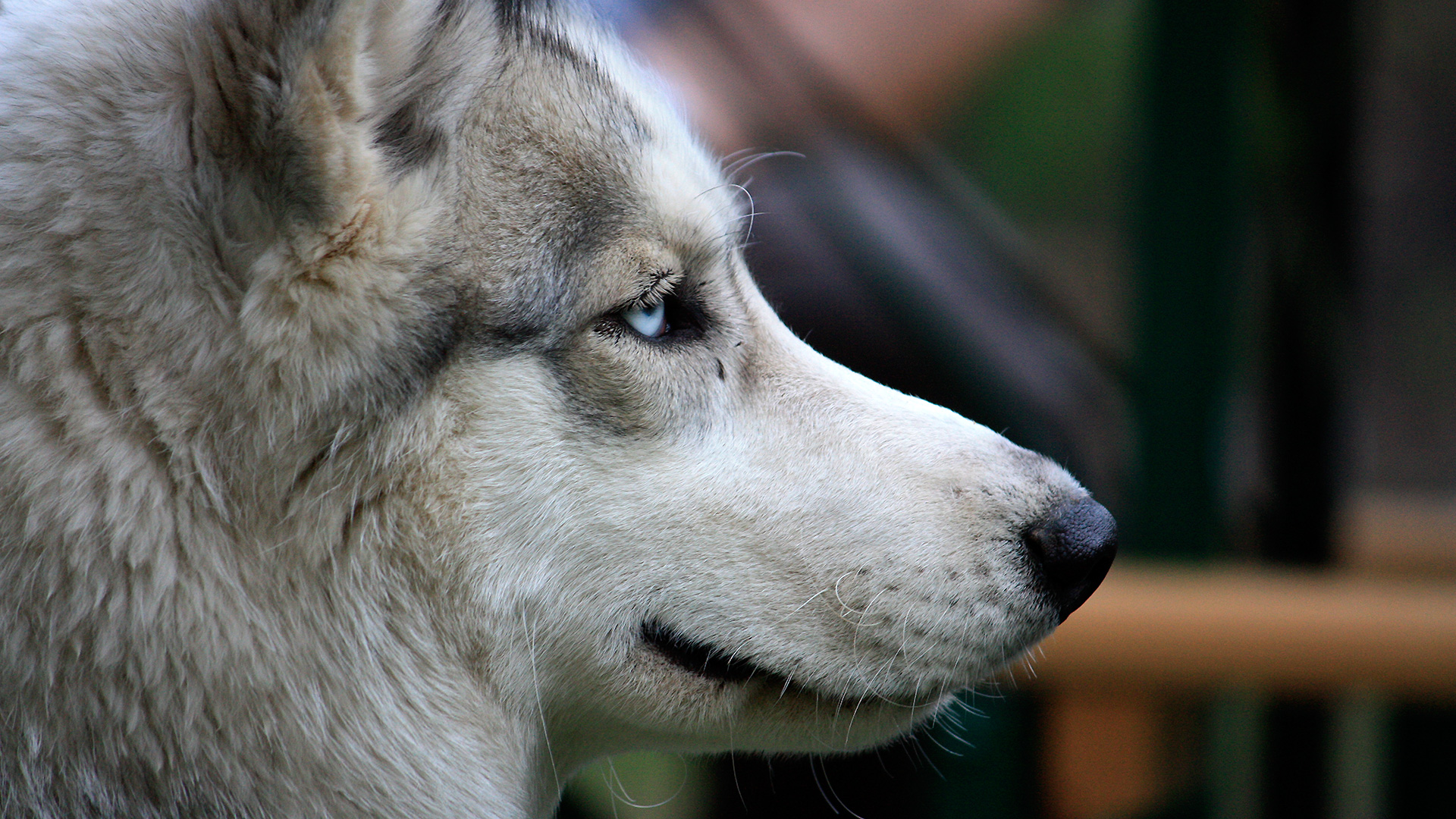 “… keen, but friendly; interested and even mischievous”
(from: “SHCA’s Illustrated Standard)

The Siberian Husky breed originates in East Siberia. Their ancestors were the sleddogs and hunting dogs of the Ciukci people and their neighbors, inhabiting the area around the rivers Kolyma and Anadyr. This area is known for very long winter seasons, most of the year covered with snow and the rivers covered by ice about 250 days p.a.

Russian fur traders like Ilya Gusak (Wiliam Goosak) introduced those apparently small, but capable sleddogs of the Siberian natives to Alaska, where they first were ridiculed as “plum-tailed Siberian rats”. For transportation the Alaskans usually used bigger dogs like (f.r. Bernese mountain dogs) and Greenland dogs. In 1909, Goosak entered a team of “Siberian rats” for the Second All Alaskan Sweepstakes, the first annual long-distance sleddog race, hosted by the Nome Kennel Club. Despite of an outstanding performance Goosak’s team ended up in third place. It was a “winner takes it all” race, so because Goosak had placed all his money in his team and the unlucky driver, he had to sell the dogs to return home to Russia.

But others already had spotted the qualities of those small and speedy dogs that dominated sleddog racing for decades. In 1909 Fox Maule Ramsey, a descendant of a British noble lineage, crossed the Bering Street and returned with around 70 Ciukci dogs back to Alaska.

The term husky most likely originates from “esky”, a snarky naming for natives of the polar region belonging to the Eskimo peoples, whose fluffy dogs were used as sleddogs for draught or mail. When Siberian huskies started to dominate sleddog racing in Alaska, Leonard Seppala started breeding them systematically. A typical feature of these sleddogs was not just speed, but the ability to blaze the trail for the sled.

This ability together with the Siberian Huskies’ extraordinary stamina was the most important reason that Leonard Seppala’s team ran the most part of the Serum Run dogsled relay in 1925 – apart from his outstanding lead dog Togo.

While dogsled races were becoming more and more popular in Alaska, Canada and the Northeastern states of the US, the sports spread all over the continent, so “dryland races” were invented for times and areas where there was not enough snow. In dryland racing there is no need to blaze the trail and even in sleddog racing it became popuar to blaze the trails before starting the race. In those years the breeding for racing dogs completely changed. Two different kind of dogs were dominating the races, the still compact built Siberian Husky and a more long-legged kind, bred from Alaskan Village Dogs mixed with other breeds like the Siberian Husky and more and more hounds and pointers – the Alaskan Husky, a sledding specialist who is faster, quickly recovering and more adaptive to long-distance racing as a kind of series of sprint races.

Hence, Alaskan Huskies proved themselves very successful. Although due to growing less undercoat they are more dependant on jackets and booties, they are the preferred dog type at long distance races like the Yukon Trail and the Iditarod today. However, a breed standard was never established, because breeding Alaskan Huskies is solely focussed on the requirements of the different races.

Scandinavians Going Their Own Way

In Europe, particularly in Scandinavia, another dog type was created by crossbreeding Alaskan Huskies with German Shorthaired Pointers and English Pointers, the Eurohound or Scandinavian Hound. Usually Eurohounds are mixed from purebred parents of different breeds/types.

In the US crossbreeding Alaskan Huskies with Greyhounds resulted in Greysters, very fast, shorthaired giant sleddogs.

Both types were never supposed to become a breed recognized by the AKC or the FCI.

Breeding Lines In The Siberian Husky

The success of the Alaskan Huskies and other types lead the breeding of Siberian Huskies to a crossroads. Since 1930 the breed was recognised by the American Kennel Club (AKC) and two years later the first Standard for the Siberian Husky was published in the AKC Gazette. Now many mushers switched to breeding Alaskans or Hounds. Thanks to the commitment of several breeders like Lorna Demidoff, the historic breed of the Siberian Husky was carefully preserved.

Since around 1950 breeding Siberians somehow seemed to divide into show lines and racing lines, with the show lines more and more domnating the dog shows. Breeders of show lines are focussed on aesthetics, on the dog’s conformation to the standard and a harmonic appearance. Many specifics of the breed are carved out meticulously like eye set, ear set, the stop, an effortless movement. Here sometimes function got out of the focus, and some of those beautiful animals are no longer capable what the breed once was bred for – “carrying a light load at a moderate speed over great distances”.

Meanwhile, racing lines were and are bred by mushers entering their teams to races; their main requirements are health and athletic abilities. Racing in areas of the temperate climate zone lead to changes in breeding, and so sometimes dogs of a successful racing team hardly meet the standard any more.

A Husky Is Not Always A Husky

“The Siberian Husky is a medium-sized working dog, quick and light on his feet and free and graceful in action. His moderately compact and well-furred body, erect ears and brush tail suggest his Northern heritage. His characteristic gait is smooth and seemingly effortless. He performs his original function in harness most capably, carrying a light load at a moderate speed over great distances. His body proportions and form reflect this basic balance of power, speed and endurance”. (Standard, Source)

The Siberian Husky is neither a fluffy Bambi-eyed furball that cannot even drag a car tire down the road, nor is it a long-legged, square-built sprinter with scarce undercoat that needs a jacket to survive winter in Lapland. 😉

Originally breeding dogs means to produce the ideal dog for a specific purpose in a specific environment by selective sexual reproduction. The Siberian Husky was not bred for the temperate climate of Central Europe, istead his ancestors come from the large regions of permafrost in East Siberia, where they lived as sleddogs and hunting dogs among the Ciukci, nomadic hunter-gatherer and reindeer-breeding peoples. The evolution of the breed in Alaska was focussed on breeding a light, fast, enduring sleddog for leight-weight transport in the Arctic region, not a powerful draft dog like the Alaskan Malamute or the Bernese Mountain Dog.

Hence, a distinctive double coat with thick undercoat and middle-long guiding hair is an essential feature of the Siberian Husky. It works like a kind of climate-control, keeping the dog warm in winter and cooling it in summer. You can find this double-coat in many northern breeds like Alaskan Malamutes, Greenland Dogs, Island Dogs, Norwegian Buhund, Jakutian Laiki.

The Siberian Husky’s primary task as a trail-blazing sleddog requires a structure different from that of a draft-dog or a sighthound. The Standard states:

“The back is straight and strong, with a level topline from withers to croup.” (Standard, Source)

I respect sportsmanship and I understand that the drive to win races, even though they are hosted in a climate zone Siberians are not perfectly adapted to, makes varieties necessary. On the other hand, I do not condone ruining the anatomic structure when running after cups and ribbons. Short upper arms, sloping backs, extremely stacked hindquarters and extremely arched necks are what we often see in the ring. These features might make a dog look more fancy and flashy and some even disguise real flaws in the structure; but they are not desirable at all. Because (as initially stated in the foreword to The Illustrated Standard by the SHCA):

“In no breed more than the Siberian Husky has function dictated form.”