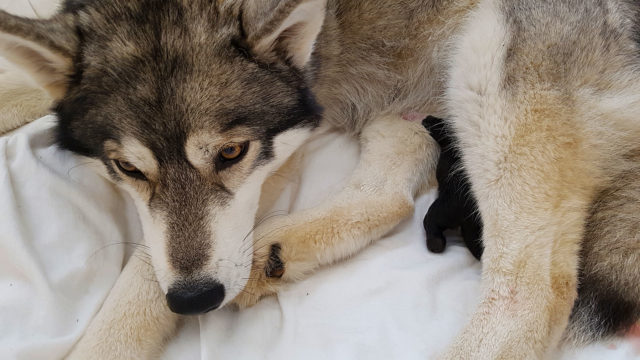 The C’babies of Kahnawake were born on the 61st day after Nukka met Finn, April 9th 2019, which was my father’s 84th birthday. Nukka and I had an halfway sleepless night before that day due to labour, rummaging, pacing and panting (not me – Nukka!). She had decided to rest in the whelping box what she had refused the days before.

After even more labour, at about 1:30 pm, Nukka gave birth to her very first pup, a black boy with black mask. Then, within 2.5 hours 3 more pups followed, a copper girl, a grey-white boy with a mask and a red boy (I rather call it milk chocolate), all without much effort. Then she decided to rest, taking care of her babies. And after little more than 3 hours the last pup was born, easily as the 3 before, a grey-white girl with a mask.

All pups had a weight around 500 g at birth, they are drinking well and gained weight during their first night. So again we can say thank God, all went well!

During the first two weeks the little ones grew well and gained a lot of weight. Nukka takes good care of her babies, but looks after herself very well, too. She is relaxed and loving and she puts her trust in us.

After about four weeks the C’babies moved into the litter room and spent most of the day outside in a pen that we expanded from time to time. Their playground was made up with toys and little tunnels, and friends came to visit and play with them. They grew up, seeing humans as friends, as well as the rest of the pack.

By the time they went to live with their furever families, we had five little happy rascals.

This will be the only litter of Finn and Nukka, since one of their offspring was diagnosed with a juvenile cataract, when she had her first eye check to become approved for breeding. The young girl, Maya, has no problems with her eyesight and is, apart from the cataract, cleared of hereditary eye diseases. Yet, according to the rules of our club, the DCNH, we ill not breed her.

You will find pictures and stories of the C’babies in our blog using the tag litter C.